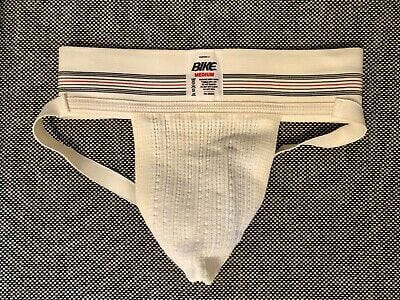 Mens jockstraps have been worn for years to protect men from sports injuries, often times being used with a cup for added protection. But men also wear them to help keep their package supported and together in one place. When you're riding your bike or up to bat the last thing you want to think about is if you're going to flop around unnecessarilly and hurt yourself.

Where Did Mens Jockstraps Come From?

The jockstrap was invented in 1874 by C.F. Bennett of the company Sharp & Smith. They were a Chicago based sporting goods company. Originally jockstraps were designed for bicycle jockeys who were going around the cobblestone streets of Boston. Can you imagine trying to ride a bike everyday over cobblestones? Sounds awful, especially if your family jewels are constantly bouncing everywhere.

In 1897 Bennett formed the Bike Web Company, he got a patent for the design and started mass producing it. This same brand was not retired until 2017, by Russell Athletic. In fact, it was a standalone company until 2003 when Russell Athletic bought their trademark. Quite an impressive run for a business, 1897-2003, wow!

The jockstrap has a design that is simple, but effective. There is a waistband, of course, and then a pouch area that covers your scrotum and penis. The pouch is connected by straps at the bottom that run between your legs and wrap around underneath the buttocks.

There are different jockstraps for a variety of sports but overall that is the general concept. The pouch is usually a sleeve as well that you can put a cup into for sports like baseball. What's interesting is that this is basically the same design we have been using since 1874. Usually items receive some kind of update by now!

Jockstraps paved the way for the classic Brief to be invented. Briefs are highly supportive, similar to that of a jockstrap, because they are tight fitting to the body and they hold everything in place well due to the brief being right up against your skin. But they cover all of your buttocks. The material is usually somewhat elastic so that it can move when you move.

Why Use a Jockstrap?

Mens jockstraps were first invented for sports and designed to hold an athletic cup. Many sports nowadays require men to wear a protective cup in order to play. These include but are not limited to Baseball, Boxing, Hockey, Football, Fencing, and Lacrosse. Cups are usually made of plastic although have been made of steel before as well. They are designed to form a protective shield around the scrotum and penis so that no serious damage can occur to them while playing. Cups are also designed differently for the different sports. Soccer would have a more flexible cup because you are constantly moving and kicking. Whereas Boxing may have a cup and jock combo that is built into other layers of protection. Baseball would need a very hard and firm cup because the ball would be traveling at it with high speeds.

Fashion jockstraps are also becoming a more prevalent item. They are often used to lift the man up and forward. Many people use it to enhance the masculine appearance of the wearer. Just like women sometimes wear pushup bras, men wear fashion jocks to pull up their package. I often get comments from spouses saying their man looks great in a pair of Underwear For Men.

Jockstraps are now being used more and more for medical conditions. Jockstraps can help with conditions like senior sag, prostate cancer, inguinal hernia, incontinence, and hydrocele to name a few. Having extra support means that you are relying on the item to support you so that your body can work harder at helping you recover. For conditions that are ongoing the support makes life more comfortable. For an inguinal hernia the support of the jockstrap means less pressure on the inguinal canal. For a hydrocele it helps control the enlarged area and keep it secure in one place. Adjusting is a problem that most men deal with on a regular basis and having something that keeps you comfortable in one place helps to make sure you don't have to adjust yourself anymore. That means staying comfortable all day long!

Underwear For Men features a drawstring adjustable support pouch that functions similarly to a jockstrap. It offers comfort, safety, and support. But you can also tighten or loosen it as much as needed, offering a custom fit for each man. It also lifts you up more than a jockstrap providing enhanced comfort while reducing the chance for chaffing. A jockstrap just compress your package whereas UFM lifts you up and lets everything breathe. It's the ultimate combination of function and comfort. Try A Pair Today! (Use code TRYAPAIR for $5 off your first order).